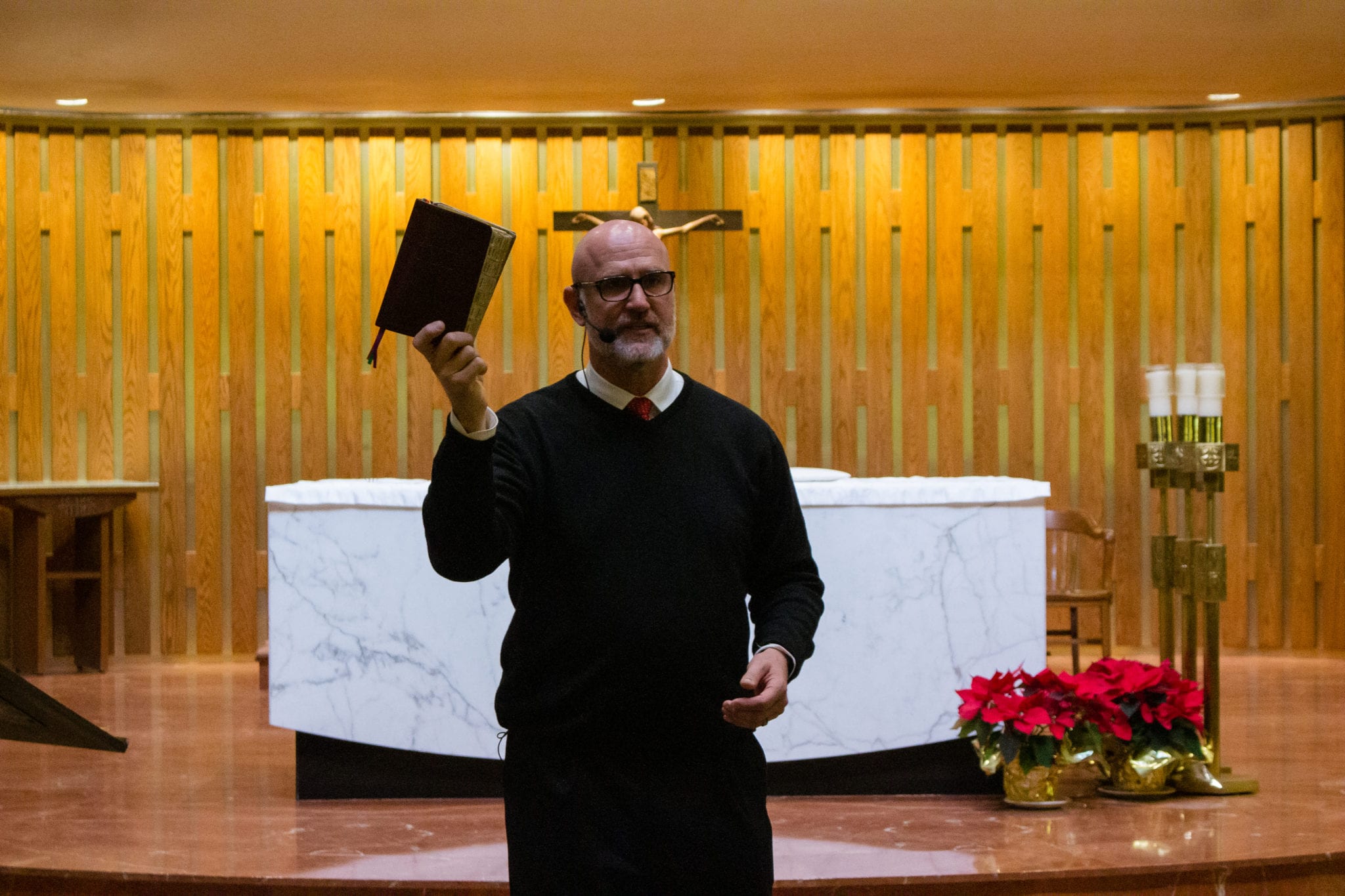 Home > Men of Faith Conference  > Courage & Fortitude to do His Will

Posted Mar 02, 2020 in Men of Faith Conference, Past Events by Adam Helmers
Share

On January 18, 2020, over 300 men of all ages and from all distances in Southwestern Ontario gathered for the Men of Faith Conference at St. Michael’s Parish. St. Michael’s has hosted the Men of Faith Conference for several years now, and usually hosts the event for a whole day on a Saturday, from 8am to 4pm, utilizing the sanctuary and parish hall for the activities.

The idea for the Men of Faith Conference is to provide an event for men of all ages to be renewed and encouraged in their faith with new information, powerful speakers, and strength from comradeship with other men of faith.
The theme this year was “Courage & Fortitude to do His Will”. The guest speakers were Elvis Grbac, former NFL quarterback and Super Bowl champion, and Cale Clarke the director of the Faith Explained Institute. Both speakers spoke at great length about having the courage and fortitude to do God’s will in your life. Elvis shared his experience as a pro NFL football player and athletic leader as he witnessed and remained true to his faith amid a secular environment. Cale Clarke embarked on a historical account of the lives of the apostles and how the message and mission of Jesus Christ remains the same even today. Both speakers presented a life in the image of Jesus Christ through practical commitments such as prayer and the sacraments. Ultimately, the message of the day was about developing what it takes to live and share our faith with one’s family, co-workers, and friends.

Cale Clarke began with a reference to the gospel of Mark, and Jesus’ appearance to the apostles after his resurrection when He commissions them, “go into all the world and preach the Gospel to the whole creation.” (Mark 16:15) The first part of that passage begins with Jesus upbraiding the eleven for their unbelief in His resurrection. Cale compared this to a story of coach Belichick scolding Tom Brady, the six-time Super Bowl champion, highlighting the importance of accountability even among top athletes; or, in the case of scripture, the first apostles of Jesus. “Peter’s His QB, he’s his quarterback, he’s his team leader on the field, of his apostolic tribe” Cale expanded on the analogy, “they thought it was a ‘tall-tale’ when the women spoke of the risen Christ.” God’s ways are not our ways, the method by which Christ decided to share His resurrection was through small personal interactions with the first disciples, not through conventional human displays of power and triumph. Cale Clarke argued that the church is bleeding out from its active participation. “If we were all functional in the faith” continued Clarke “why are we not having the impact for Jesus Christ in the world that maybe we should?” Cale Clarkes overall message was one of evangelization, he stressed the importance of an active participation in the Parish that is rooted in a personal relationship with Jesus in the Eucharist and reaches out to other Catholics with friendship and love in order to bring them back into the fold.

Whatever success that you want, I’m here to tell you, put Christ as the centre of it.Elvis Grbac

“It’s up to you, each individual guy in this room” Elvis opened his first talk, “to be the men you are called to be.” Elvis Grbac gave three talks – “True to the Faith in the Middle of the World”, “Men of Faith Pray”, and “What am I doing today?” The humility that Elvis exemplified was inspiring, he placed his Super Bowl championship ring on the ground in front of the altar, “do you see a difference?” The perspective was apparent once the small ring was placed on the ground in front of the steps and large altar at St. Michael’s. The successful athlete came from humble beginnings; two immigrant parents who worked as hard as they could to provide for the family. He attributed his faith to the faith exhibited by his parents, “my parents taught me three things; faith, family, education.” Drawing from scripture and the gospels, Elvis drove home the importance of sacrifice and love. “Whatever success that you want, I’m here to tell you, put Christ as the centre of it” Elvis concluded, just as Christ laid down his life for us, we are all called to offer up our whole life to Him in serving our communities, friends, and family.

Year to year the conference theme varies with the guest speaker, but there is one consistent tagline for the whole event; a men of faith conference is once a year, a men of faith commitment is 365 days a year. While the event is packed with motivation and energy, for the organizers it is crucial that the men who attend are not left on their own until next years conference. That is why all the guys are encouraged to make a commitment based on a series of example commitments illustrated by the guest speaker and outlined in the conference program. These commitments include visiting the sick, attending daily Mass, receiving the sacrament of reconciliation, daily prayer and more. This year marked the introduction of a new opportunity for men to follow-up on their experience at the conference. 2:12 is the title of a men’s group that kicked off with a “spiritual boot-camp” that started one-week after the conference. Following the boot-camp men are then invited to join in small groups that meet 2 times a month for 12 months to hold each other accountable for their faith commitments and learn to deepen their understanding of the Catholic faith together.

What am I doing today?

Growing in the Image of Jesus Christ – Part 1

Growing in the Image of Jesus Christ – Part 2